A genuine master of his craft, Carey Chen is gaining worldwide attention for his unparalleled portraits of life at sea. 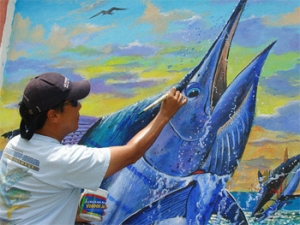 Chen’s fascinating use of colors and his knack for capturing detail has catapulted him to the forefront of the marine art industry. The incredible blend of colors and exquisite detail are the trademark of each Carey Chen masterpiece. Although brilliance exudes from his work, painting is the latest endeavor in a life full of adventures.

Chen grew up with a special love for the ocean. Although his artistic abilities were apparent at an early age, Chen opted to pursue other hobbies including racing motorcycles and show cars. His spare time was spent fishing and diving off the coast of Miami and the Florida Keys.

Chen found time each year to return to his hometown of Jamaica fishing the annual Port Antonio Blue Marlin Tournament where he helped mate on several of the top sport fishing boats. In 1987,1988 and 1989 Chen fished on three different boats, helping bring home the first-place trophy each year. With over 300 blue marlin releases to date, Chen has captured the beauty of game fish in their natural habitat.

Fishing tournaments became Chen’s new passion. He turned in his 20-foot Sea Craft for a 25-foot Mako and fished in several tournaments throughout South Florida. His reputation as an experienced and accomplished angler grew rapidly, and so did his visual memory.

The more he fished, the more he witnessed incredible, breathtaking moments at sea. Fierce battles with powerful creatures produced moments that became etched in Chen’s mind.